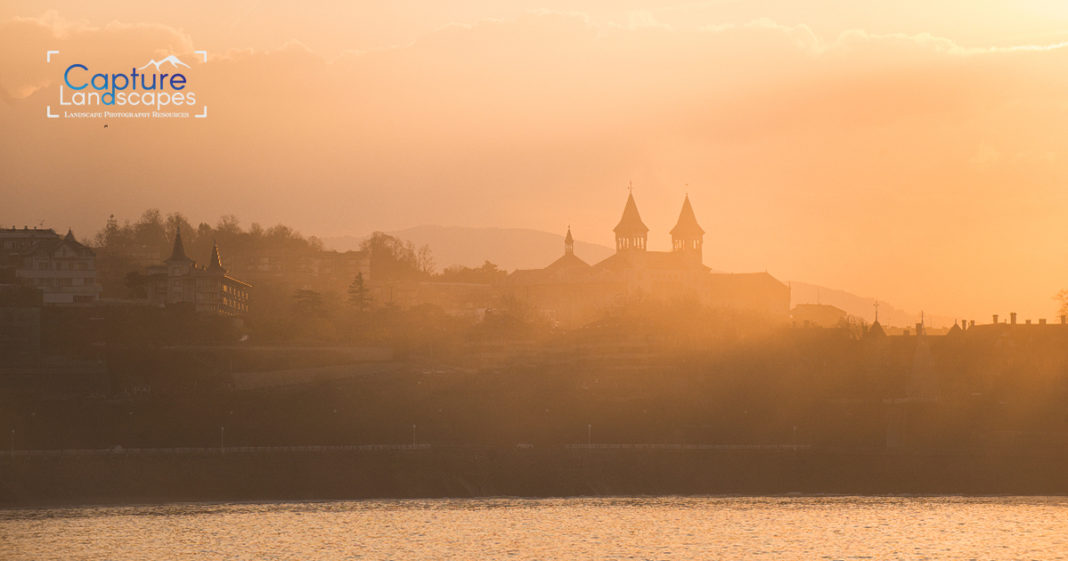 Adobe Lightroom, Adobe Photoshop and Capture One are the most common softwares to be mentioned when talking about photography and post processing. However, in recent years, more softwares have been introduced and many of them are equally as powerful as those mentioned above.

Picktorial is one of these editors and I’ve had the pleasure of testing their 3.0 Beta version (and now final version) for a while. Despite still having some minor bugs, the Picktorial team is working hard and constantly searching for new ways to improve the performance. There are several features included in this software that I’ve instantly fallen in love with and I notice that these are features I miss in other editors such as Lightroom.

This article will not be a complete review of the software and its features but a first impression, instead, and a more general look at possible workflows.

Picktorial is a non-destructive RAW editor that makes it easy to intuitively organize and enhance photos. The editor is made exclusively for Mac and it has been viewed as a replacement for Apple’s own Aperture.

Similar to the more known Adobe Lightroom, Picktorial works as both a library and post-processing platform. Its layout is intuitive and organized, which makes it easy to work with. Both the Library and the editor tab are in the same window so you don’t need to switch between Modules (such as Library and Develop in Lightroom) when you want to move on to another image.

I’ve been an Adobe user for more than 10 years and have used Adobe Lightroom ever since I first started with photography. Being used to its interface, I was quite curious how easy it would be to transition and develop a workflow with Picktorial and how, if at all, it would perform differently.

Despite having some minor issues with the first Beta version, it didn’t take long until I had familiarized myself with the software and knew how to easily navigate through it. The layout is clean, simple and well-organized. Going back and forth between different images is fast and easy due to the library and develop module being within the same window.

Not only are you able to use these precise masks, you’ve also got the option to change blending modes and adjust opacity for certain levels, making it possible to simulate effects such as the Orton Effect. 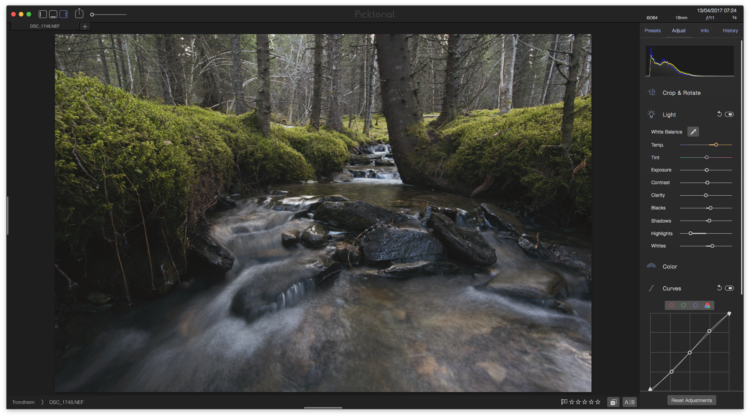 This opportunity is by far my favorite and is part of what makes this an incredibly powerful software.

The Luminosity Masks, Color Masks and Blending Modes are compatible with the Radial, Gradient, Brush and Fill tools, which all have a broader choice of adjustments than they do in Adobe Lightroom. Within an adjustment tool such as the Brush you’re able to change:

In other words, you’ve got a lot of possibilities when working on selective adjustments.

As mentioned earlier, the layout and functionality of Picktorial is top notch. It didn’t take long before I got used to the interface and could easily navigate through the editor.

The editor is built in such a way that it’s supposed to be easy for a photographer to develop a workflow and most of the tools and adjustments are located at intuitive places. However, if you’re not used to spending a lot of time in editors, I strongly recommend that you look through their videos or follow along with the built-in guide the first time you use it.

Some of the tools (such as luminosity masks and blending modes) are slightly harder to find and you’ll need to open an extra panel to reveal them. Still, they are easy to find once you’ve learned where they are.

The only thing I dislike about the layout is that the Sharpen Tool is made as a selective tool. Typically, I prefer to sharpen the entire image and would rather have the opportunity to mask out certain areas I don’t want. It’s still easy to add global sharpening (you’ll just need to add a fill layer and sharpen it) but I find the extra step to be slightly unnecessary. This particular step might not be as intuitive for a person who’s just getting started with editing softwares.

Even though this is a small tool, I can’t avoid mentioning the edge sensitive brush. When working on selective adjustments you’ll spend a lot of time working with a brush. In other softwares, such as Lightroom, the brush is good and the editor attempts to keep the brush’s adjustments inside an edge.

In Picktorial, however, its functionality has taken a huge leap forward. The edge-sensitive brush performs way better than in any other editor I’ve tried and I can’t do anything but compliment them on this.

What does this mean? Let’s say that you’re brightening the peaks of a mountain (see this example video). Normally, when you use a brush the adjustment will also be visible in the sky (unless you zoom into 100% and brush extremely carefully). With the edge sensitive brush, the editor manages to “see” the difference between mountain and sky, and add the adjustment only to the mountain even if the brush is slightly outside it.

This is a great function when working with very specific adjustments that should only be applied to parts of the image.

I have to talk briefly about the bugs I experienced throughout the testing of this software.

From the beginning, I experienced a few minor issues regarding the performance (note that I haven’t seen this mentioned in other reviews and I believe may have been a problem with my first version as I have not experienced these problems after using the latest version). When working with certain adjustments such as the sharpening or smoothening tools, the software has frozen a couple times.

On a few occasions, it crashed when I attempted to zoom in on an image and it took several attempts to restart the software.

That being said, I haven’t experienced any other problems and I’ve had a good dialog with the Picktorial team along the way; they’ve been super helpful in resolving any concerns I’ve had and, as mentioned, the bugs haven’t reoccurred after updating to the latest version.

I said in the beginning that it would take a lot to make me consider implementing software other than Lightroom in my workflow. After testing Picktorial during a period of several weeks, I’ll admit that I’ve been impressed by its performance.

The RAW editor seems powerful and it performs as well as Lightroom, Capture One and other editors.

Being able to work with selective adjustments and using Blend Modes and Luminosity/Color Masks is by far what makes this editor very interesting for me. These features are something I’ve been missing in Lightroom and I believe Picktorial has done a great job developing them.

I’ll definitely continue experimenting with this software and perhaps it might become a more important part of my workflow. Until then, I’ll keep testing and preparing a more in-depth review for the future.

PS. Picktorial offer a 30-day free trial so make sure that you test it yourself! 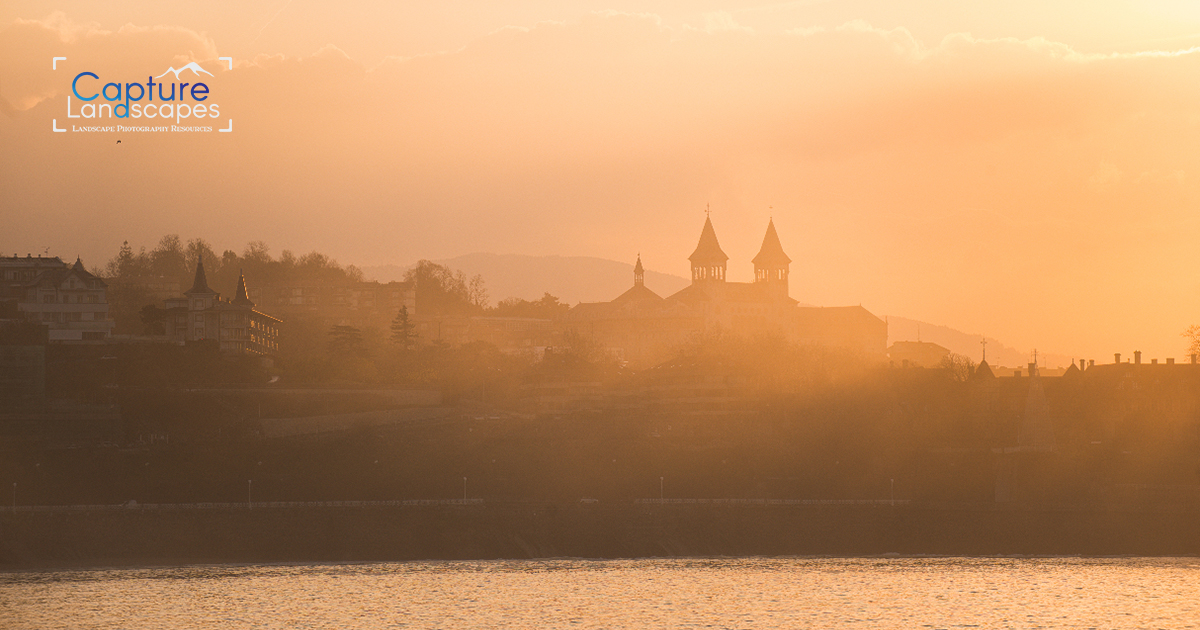